Building a Culture of Resistance in South Tucson

The newest worker at Casa Maria, Tanya Núñez describes what led her to become a filmmaker and the importance of building a culture of resistance in South Tucson.
4 min read

My name is Tanya Núñez. I’m a Mexican-American filmmaker, UofA graduate, raised between the border towns of Douglas, Arizona, and Agua Prieta, Sonora. I have been living in Tucson for nearly a decade. I’m also the newest worker at Casa Maria Catholic Worker House — working in the soup kitchen, creating content for our social media, and doing community outreach around the neighborhood since July. In that time I’ve learned more than I ever have about the streets of South Tucson and I have listened to countless stories from the residents who come and visit us every day. Undoubtedly, Casa Maria is deeply rooted in South Tucson. It only takes going there once to see its authenticity as a pillar of Barrio Libre, made by and for the interests of the resilient families who’ve lived here for generations. Working at Casa Maria is a humbling experience, and it’s inspired me to advocate for oppressed, poor, and working people any chance I can, take pride in where I come from, and fight relentlessly for my people — even if the odds do not seem in my favor. Working at Casa Maria has had me thinking about how we can use art to preserve South Tucson’s rich history and build a culture of resistance. Like any David and Goliath story, size (or money) matters much less than courage, compassion, and commitment to doing what is right. I believe with this in mind, anything is possible for South Tucson. 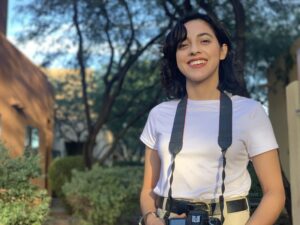 You may wonder why someone like me would have ended up at Casa Maria. I was initially drawn to Casa Maria and their work after meeting them at one of their many actions against gentrification and GPLETS (government property lease excise tax). It was through them that much of the community has learned about the various ways our government facilitates gentrification of our barrios. GPLETS are one of those examples — they effectively work as taxpayer giveaways to mostly wealthy developers and push toward the displacement of long-time residents to replace them with more affluent people. If it wasn’t for the voices of Casa Maria speaking out against these types of injustices and mobilizing others into joining the fight to defend our barrios, much of what is going on in the city government would have been ignored and hidden from the public as much as possible. The government does not want us challenging the status quo, criticizing its failures, and holding them accountable when acting against their constituents in favor of the rich. They would much rather organizations stick to charity work and nothing more. However, it’s this kind of work that has made Casa Maria stand out as an organization throughout the decades. Uncompromising in its Catholic worker daily praxis of mercy, Casa Maria has grown to be a strong and influential force among Tucsonans of all backgrounds who genuinely care about the future of their city— myself included. At Casa Maria, we are not complacent with the socioeconomic reality that surrounds us, which becomes starker with each passing year. We understand that our duty isn’t just to feed and clothe those in need but to erase the ever-expanding wealth divide caused by capitalism. We work to raise people out of poverty and build a better world where acts of sharing and compassion are the norm, not the exception. It takes a lot of effort and revolutionary optimism to envision what this kind of world may look like and what steps it will take to get there, but in my opinion, it’s the only kind of world worth imagining and fighting for.

This is where my role as a filmmaker comes into play. I decided to become a filmmaker because of its powerful ability to tell profound and intimate stories about marginalized and working-class communities. Coming from a sleepy, rural border town with a population below 20,000 people, my imagination is what got me through the long, hot days. Art was what helped me escape the brutal reality of the racist border wall and the ominous surveillance state that quite literally surrounds my community. For kids like me, who were mostly Mexican and working class, if you wanted to get ahead in life it meant never challenging the system — more so, it meant assimilating into its culture. In many cases, you are pushed to join the very workforce of the border-industrial complex (border patrol agents, customs agents, prison guards, military, cops) that enact violence against the most vulnerable people in your society,  lest you risk the chance of ending up on the other end of the law (gun). It was easy and almost necessary for young people to become desensitized to the injustices around us because of our socio-economic situations. If it wasn’t for art, community, and storytelling which invigorated my moral compass and raised my class consciousness, I would have never left “Plato’s cave” where the ruling class would have liked me to remain ignorant and complacent.

Thus, my goal has always been to use film to tell stories that otherwise would not be told and help preserve history, particularly my Mexican history, that the dominant culture would otherwise hope to erase from our collective memory. With the growing attack on “critical race theory” and ethnic studies within our very own Tucson schools, cultural work is more important and more powerful than ever. South Tucson is amid cultural genocide through gentrification, but I look around me and there is also the potential for this barrio to become the birthplace of a cultural renaissance. Now more than ever, it’s crucial for artists, workers, organizers, and activists to come together and build a culture of resistance to fight against Goliath, a.k.a. the developers and the government officials who do their bidding. Personally, I have found a home at Casa Maria where I’m blessed to have the opportunity to put my heart and my art into something beautiful and worth defending —for that I’m grateful and filled with hope for a better future for our barrios.