Miguel Hidalgo, The Virgen of Guadalupe, and Mexico’s Day of Independence

September 16th marks the anniversary of Mexico’s declaration of independence from Spain. Although many in the United States might be unfamiliar with this date, the opposite is true across the US-Mexico borderlands. Tucson, itself once a part of Mexico, has a long history of celebrating Mexican Independence Day throughout the decades with fireworks, fiestas, parades, and lots of good food and music.

Tucson’s first non-native settlers were Spanish soldiers and Franciscan missionaries. Originally a presidio on the frontier of New Spain, Tucson established itself as a Mexican community before the arrival of Anglo settlers.  Soldiers, farmers, desert-dwellers, northernmost defenders of the Spanish crown, and civilian families settled within the presidio to farm the banks of the Santa Cruz River, mine in the surrounding hills, and graze cattle. Some were Spanish born in the “New World”, while others were products of the racial mixture that characterized the frontier. The Spanish and Mexicans would find allies among the Pimas and Papagos who lived along the Santa Cruz River, and against their common enemies, the stronghold Apaches. The Western Apaches were the initial reason for establishing a presidio in Tucson, and the quality of life of the town would be largely dependent on the relations with the Apaches for decades to come. Tucson itself never became directly involved in the struggle between Mexico and Spain, but the war of independence, ending in 1821, would disrupt the institutional and economical framework of the area and initiate an influx of Anglos into the prominently Mexican village. Tucson would transform from an isolated agrarian community of Sonora to an urban center of the Southwestern United States with the Gadsden Purchase in 1854.  Even so, by 1880, Tucson’s population was still predominantly Mexican.

In Los Tucsonenses, Thomas Sheridan says: “During the 1870s, when Mexican immigration to Tucson was surging, the 16th of September was an extremely important occasion, an opportunity for Mexicanos to affirm their spiritual ties to the mother country, even if they were living north of the border.

The book also describes what was seen as the “greatest fiesta of them all” at the time, the Fiesta of San Agustin.

Beginning on St. Agustine’s feast day of August 28, the celebration often lasted until the 16th of September, Mexican Independence Day, or beyond. Likes the fiest of San Francisco in Magdalena, San Agustin was a two-  to three-week marathon, an endurance test of reverance and revelry which ran the gamut from solemn processions to games of chance.

Orthodox Catholic Ceremonies inagurated each fiesta and gave the celebration its legitimacy. During the 1870s and 1880s, there was often a solemn high mass in the church of San Agustin—a lithury preceded by vespers and followed by a procession around the church plaza, the old plaza de Mesilla. The procession was a major social event. All the homes of the Mexican families around the plaza were decorated with lights (farolitos) and banners, and the procession itself was led, in the words of Las Dos Republicas, by the “most select of our society.” San Augustin, therefore not only brought the Mexican community together through religious ritual but also provided an opportunity for members of the Mexican elite to validate their status as elites of that community.

Despite what Mexican Independence has meant for different people at different points in time, the War of Independence undoubtedly represents a radical point in Mexico’s history. Before then, Spain ruled what is now formerly known as Mexico for over 300 years between 1521 and 1821. That meant that the people and resources of Mexico were in direct control of the Spanish Crown. In Mexico and the greater parts of the Americas, the Spaniards stole vast amounts of wealth and subjected the people to slavery in their own land. Coveted was Mexico’s silver and gold. The Spaniards also set up a system called Encomienda, which enriched them with the labor of the Indigenous population that produced goods and food.

By stealing Mexico and the rest of America’s resources and labor, Spain became one of the richest empires of its time. Spain’s mass accumulation of wealth, as well as other European countries set to colonize different parts of the world, gave birth to the early Stages of Capitalism, which were financed by the stolen wealth of indigenous cultures, and the enslavement of African people. This created a ruling class (in Mexico’s case it was Spain) that took possession of the land and converted the resident population (the indigenous population) and made them landless. Spain sought to destroy temples, pyramids, and artifacts but could not destroy the will of the Mexican people who had resisted them from the very beginning.

The 16th of September is commemorated across Mexico as the day when a priest by the name of Miguel Hidalgo, gave the famous El Grito de Dolores or The Cry of Dolores. In the city of Dolores, located in the state of Guanajuato, on the night of September 15th, 1810, Hidalgo rang the bells of the church to gather the people of the town. It was then that he declared himself in revolt against the Spanish monarchy and rallied others to fight for freedom. He also emphasized racial inequality and the redistribution of land. This became known as the “The Cry of Dolores”. 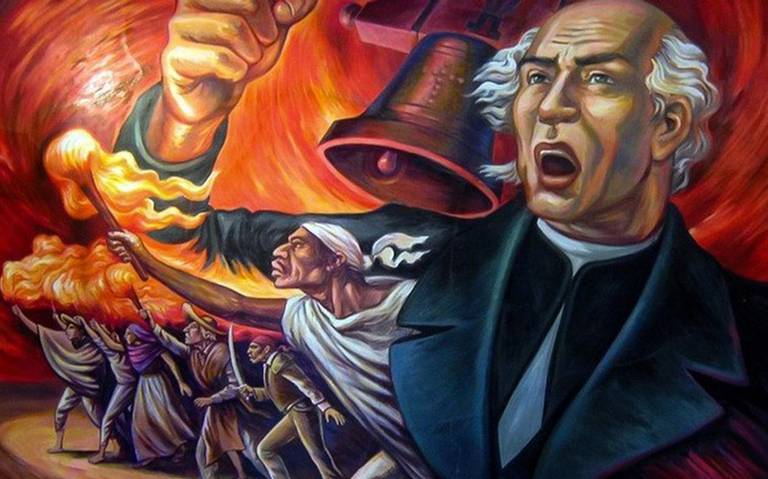 “My Children, a new dispensation comes to us today…Will you free yourselves? Will you recover the lands stolen 300 years ago from your forefathers by the hated Spaniards? We must act at once…Long live Our Lady of Guadalupe! Death to bad government! Death to the gachupines!”

The independence movement turned into a war against the upper class. Hidalgo and his followers set on a revolutionary march all the way to the capital of Guanajuato. There, they fought against the Spaniards and won their first battle during the war of independence. This victory was the military forest called Alhondiga de Granaditas. Ten months after The Cry of Dolores, Miguel was executed. Today Mexicans celebrate independence from September 14th through the 16th due to the famous speech given on that night, over 200 years ago.

Although Mexican Independence from Spain did not result in complete liberation for people in Mexico, it did mark the downfall of the most powerful monarchies in history and was foundational for Mexico’s upcoming eras of resistance. Miguel Hidalgo, white-washed and co-opted over time by ruling institutions, in reality, represented one of the most radical ideas of his time. Despite his position as a simple clergyman, was an intellectual and a rebel, constantly getting into conflicts with his superiors. Hidalgo knew seven languages, including several indigenous ones, and was greatly influenced by the ideas of the Enlightenment and the French Revolution.  He was trapped between two worlds; on one end he knew the most advanced revolutionary ideas of his time, and on the other, he had seen all the pain and abuse the Spanish had inflicted on his people. He believed that; “The bible should not be studied on your knees and with devotion, but rather with freedom of understanding.”

Miguel Hidalgo and his army weren’t simply fighting around the issue of taxes; they pillaged the haciendas, destroyed the mines, and liberated prisoners from the jails which consisted mostly of indigenous and poor people. Miguel Hidalgo is known for telling The image of Miguel Hidalgo wielding a banner of the Virgin of Guadalupe in these battles against the Spanish is well known. Said banner belonged to the Sanctuary of Atotonilco, located a few kilometers from San Miguel de Allende. After seizing the city, it was the indigenous people who accompanied Hidalgo, who mounted the canvas with the Guadalupan image on a rudimentary crosspiece. Thus it became the flag of Independence. The banner was not carried by Hidalgo as has been spread in many images, but by the same indigenous people who took turns carrying it. The Virgen de Guadalupe is seen as the champion of the underdog, of the native, of all those who lack power in society. She continues to be relevant as long as disparities in economic and political power exist. In the same manner, we should reclaim Miguel Hidalgo and his radical ideas as a hero of oppressed people everywhere.