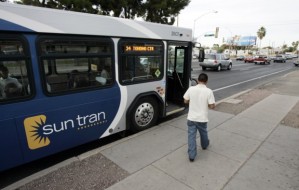 I have been attending the Transit Task Force (TTF) meetings for over two years now. This task force is formed by representatives of all the City Council Offices and Citizen Transportation Advisory Committee (CTAC). City staff is also present, including Sun-Tran Administration. Yesterday, for the first time, I thought this group of people that “represent” bus riders and all stakeholders, was actually moving in the right direction.

After so many meetings of intense discussions on the issue, yesterday the TTF finally agreed on a Transit Fare Policy for the City. The TTF recommendations will be presented to the City Council sometime in December.

But wait, who is going to present it? If it wasn’t because one of the members of the task force asked the City staff about it, it was going to be presented only by city staff. The TTF made it clear to the staff that they or a representative was going to be there and/or present their recommendation and be available to answer questions if necessary.

Maybe the Bus Riders Union has to make their own recommendations, and I am sure they will!

The transit analysis of Councilwoman Karen Uhlich has helped shape the thinking of the Bus Riders Union and key members of the TTF. The Task Force, led by Suzanne Shafer, has come up with a plan to aggressively market the bus. This will significantly increase ridership, help the environment and create increased revenue to maintain the system. Thus there is no need to raise fares.

I wonder which side the City Council will support! What do you think? So much for the hard work of the Transit Task Force if the Council decides to go with staff. Why then have a TTF?

Anyway, I just wanted to applaud the TTF for the hard work they have been doing, (although I do not agree with many of their decisions) for coming up with a fair Transit Fare Policy, and for moving in the right direction towards improving the city transit system.

Follow people-centered  news from and about South Tucson and other barrios in the larger Tucson area.