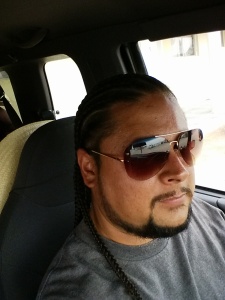 I have always been a very passionate person. One of my greatest passions is music. I was raised around musicians. Both sides of my family are very talented. I can still remember listening to my Tata strumming his guitar in the living room or pulling out his amp and microphone so I could MC while he played Tiger Rag on his accordion. I had many family members that were musicians and I always wanted to be a part of it but I lacked the hand coordination needed to play instruments. Then I fell in love with Hip-Hop.

I can still remember feeling the music, the sound of the DJ scratching and mixing records as the MC grabs the mic and busts a rhyme. I still remember my first mixing board and recording system. Me and my little brother, sitting in our tiny room, speakers and equipment on our dresser, notebooks in hand, writing rhyme after rhyme. Even though most of the music I listened to and wrote back then was of the gangster or thug mentality, it was all heart and spoke to the reality of the of being born into poverty. The struggles of coming up in the Barrio. That same struggle is what tore me away from my passion.

Most kids are told, finish school, go to college, and pursue a career that is successful and makes you money. That was no longer an option for me. I worked and I hustled, doing anything to get ahead and make money. I lost all passion for life. All that filled my head was making money, which led to a very destructive lifestyle. I gave up on rap and put down my pen and pad for over 12 years.

Only by God’s grace did I stumble upon the love of Hip-Hop again. A few years ago I ran into my cousin who was still rapping and he encouraged me to try it again. We wrote a song about the relationships we’ve had with the mothers of our children. The verse I wrote came out really good and even though we never finished or recorded the song it inspired me to pursue my passion again.

At first it was really hard for me. I couldn’t finish a verse, much less an entire song. I was still trying to write about the things I used to write about when I was young; chasing women, doing and selling drugs and of course, making money. I wasn’t living that lifestyle anymore so how could I rap about it. God gives all of us talent to be used for good. This was one of my talents and I needed to seek God in order to figure out what to do with it.

One day, as I’m struggling to write something, my daughter walks in the room singing a Hip-Hop song from the radio. I asked her if she knew what that song was talking about. She said no, but seemed to know most of the words. We went over the lyrics together and her eyes widened as she figured out the meaning. Now that the art of rap has been gentrified by pop culture, there is no longer heart in Hip-hop. It’s all about who has the biggest house, the nicest cars. All about making money and getting wasted.

That’s when it hit me. I needed to put the love back in Hip-Hop. I began to put my heart in it and write about what matters. The first song I completed in over 12 years was “Hear no evil, See no evil” which features my daughters on the chorus of the song and speaks to the current state of Hip-Hop and our society as a whole. Today my lyrics reflect my struggle, and that of many others, from many perspectives. I am revolutionary and honest in my music, with the hope of provoking others to question the world and the powers that control it.